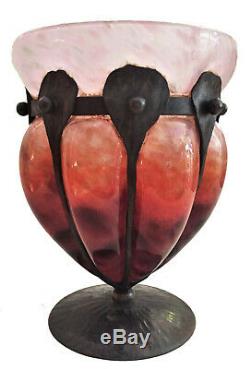 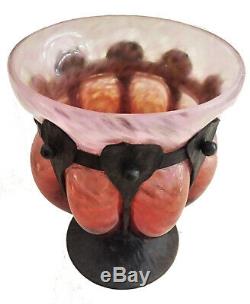 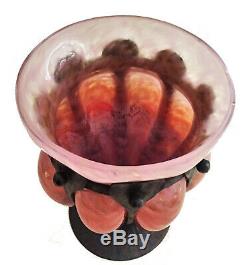 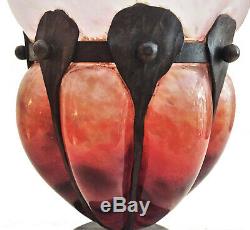 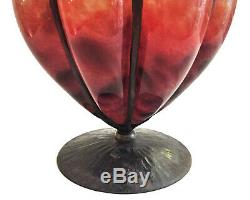 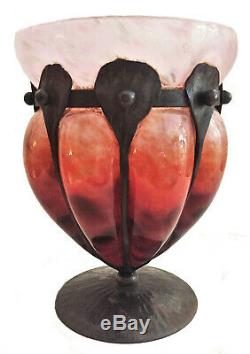 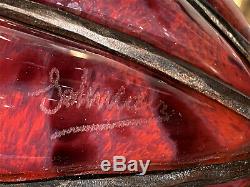 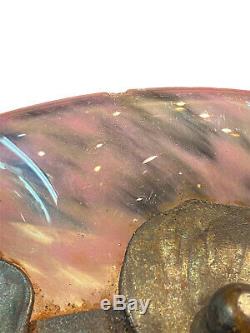 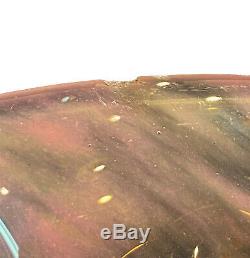 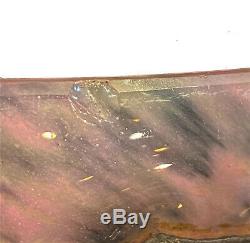 Bubbled Art Glass & Forged Iron Vase. Dimensions: 7-3/4 high x in 5-15/16 diameter (glass top) x 4-3/8 diameter (iron base). There is a little chip on the top rim, which is practically invisible to a naked eye. Otherwise, the vase is in excellent condition. Charles Schneider was born in Chateau-Thierry, near Paris, on 23rd February 1881. At an early age, he moved with his family to Nancy, the artistic center of France. Charles had started an artistic career and was already active at Daum since 1898. Concurrently, he studied the Ecole des Beaux-Arts in Nancy. In 1913, the brothers decided to start their own business and bought a small glass factory, specializing in electric light bulbs, in association with a friend Henri Wolf, at Epinay-sur-Seine. This factory was known as Schneider Freres & Wolf. The new glass works production started with, among others, a group of about twenty workers enticed away from the Daum manufacture. At the outbreak of the World War I, the firm's activity had to be stopped and the glassworks closed by the end of 1914. In 1917, the factory re-opened once again, under the name "Societe Anonyme des Verreries Schneider". At this time, public taste still favored the Art Nouveau style, and the factory produced mainly cameo glass with floral and animal designs, and vases with applied handles and bubbles. Apart from the introduction of art glass, half of the production was of commercial drinking glasses.

In 1918, fire destroyed the studios at Galle and a group of artists went to Schneiders to continue their production for Galle. Some of the factory's most interesting models during the early period were designed by Gaston Hoffman between 1918 and 1921. His pieces are not signed with his name, since he was a salaried employee of the firm.

Most of his models are in the top rank of the factory's production. After the 1925 exhibition, various new designs were created and the factory expanded to employ about 500 workers. Most of Schneiders art vases and lamps were exported to America. After the Wall Street crash of 1929, demand dwindled and the factory started to decline.

During the 1930s production of art glass was down to a few pieces a day as they concentrated on making simple designs with less colors for the local market. Attempts were made to save the firm, but Ernest had been seriously ill since the end of the 1920's and was of no help. He died in June 1937, one month after the liquidation of the "Verreries Schneider".

In 1940, during the war, the factory was requisitioned by the German troops and used as a restaurant. In 1950, Charles Schneider and his son founded a new glass works at Epinay-sur-Seine (named "Cristalleries Schneider") which was later transferred to Lloris after an accident caused by a gas explosion. Like the old Schneider factory, this one specialized in free-blown glass.

Following the artistic trend of the 1950's, the glass works produced glass sculptures, crystal vases (sometimes bubbled and colored), ashtrays, clock frames, candlesticks and fruit bowls. But this time, the glass was lead crystal, which had come back into favor in France during the 1930's after being revived in Scandinavia.

It was no longer cut, but worked almost exclusively by free-blowing and drawing. All the productions were signed "Schneider France". Charles Schneiders died in 1952 and the factory was closed in 1981. Please observe photos carefully, as they are a significant part of the description.

Any potential defect shown in the photos, but not mentioned in the description will be considered as described. We guarantee the authenticity of all items to be as represented. Ashville Fine Arts Gallery specializes in a variety of fine art, antiques, jewelry, collectibles and rare finds. If you have not seen something that interests you or that you collect, please visit often and check our ever expanding inventory.

We make a best effort to provide a fair and descriptive condition report. Please examine the photos attentively, as they are an integral part of item descriptions. Domestic & International Customers are Welcome! All items are carefully packed and insured. The item "Charles Schneider, French Art Deco Bubbled Glass & Forged Iron Vase, Ca.

1918" is in sale since Thursday, March 21, 2019. This item is in the category "Pottery & Glass\Glass\Art Glass\French\Other French Art Glass". The seller is "ashvillegallery" and is located in New York, New York.

This item can be shipped worldwide.